Dr. Elana Bashir, President of the conference honorable guests, ladies & gentlemen! As convener of the conference it is an honour and pleasure for me to welcome you all to Chitral & to the 4th International Hindukush Cultural Conference. The Conference is a continuation of the first international conference on the Cultures of the Hindukush which was held in 1970 in Moesgaard, Denmark under the chairmanship of the Late Pro. George Morgenstierne, a great scholar whom we all venerate as one of the pioneers of research in our area. The 2nd and 3rd conferences in the series were held in 1990 and 1995 under the aegis of Anjuman-e Taraqqi Khowar in Chitral Town. In the above mentioned two conferences we were fortunate to have with us two renowned scholars, Prof. Carl Jettmar of South Asia Institute of Heidelberg University, Germany, and Dr. Schuyler Jones, Director Pitt Rivers Museum, Oxford, UK. Today in this conference we have the pleasure of having Dr. Elana Bashir of Michigan UN, USA as our President. For the last more than forty years she has devoted her life to conduct research on the Socio-cultural aspects of Chitral, Gilgit and Baltistan and has made valuable contributions to the understanding of these regions. She was also associated to the 2nd and 3rd conferences member of our core committees.

This conference was due to be held in the year 2001but because of 9-11 affair and then the Covid-19 exigency we had to wait till to day. In Persian it is saidدیر آید درست آید meaning a good thing even it comes late, it is welcome. After the bitter and hard days of the last twenty years which still haunt many peoples minds till today like night mares, thanks Allah, brightness seems to have appeared again. Lets hope the bright days are long lived and the humanity enjoys the blessings of peace for a long time.

In my humble opinions the cause of our sufferings is our ignorance about each other. Ignorance leads to misunderstandings and misunderstandings divide people which often leads to clashes between people. One should hope the conferences also helps to remove the darkness of ignorance to a certain extant.

Ladies & Gentlemen!
Hindukush and Karakoram regions have tremendous importance as a repository of great cultural and natural wealth. In Chitral region alone there are more than a dozen tribes speaking different languages and possessing their own Socio-cultural characteristics. The area treasures rich oral traditions, folklore, folk history, socio-cultural patterns. Chitral can also boast on its tribe, the Kalash, one of the worlds ancient tribes having their own unique ways of life.

However, with regards to natural wealth and environment, these areas are locus of key factors in the water resources position of the whole country in the glacial cover in the high mountain valleys. It has been reported that out of 7000 glaciers, 500 lie within the border of Chitral region, Besides the area is blessed with different natural resources, such as wildlife, forests, land resources, beautiful tourist resorts etc. But at the same time due to global warming and the accompanying climatic change pattern cause frequent glacial surge and flash flood problem which have become of crucial importance. Given the rapid population expansion, increased pressure on limited natural resources and the possibility of far reaching climatic changes the study of problems to the protection of natural resources takes on a laid urgency.

Ladies & Gentlemen! In the previous two conferences we learned down two broad approaches. The same we place before you today as well. First we hope that this conference will serve to increase awareness at all level among the local communities of the H.K. region, among the opinion makers at national level and among the world –wide community of scholars of the complex challenges and problems faced by us in these areas.

This is an era of unprecedentedly rapid technological and cultural change all over the world. While Chitral is considered one of the lesser developed regions of the country, we appreciate that through the efforts of our governments both central and provincial, much has been done to lay the lay the foundation for a sound education structure to encourage rural development projects and to improve the network of roads within the region. Lately the construction of the Lowari tunnel has been a land mark in the history of this area and also a ray of hope for its future progress. In the near future the region is also going to be connected to the CEPEC project which would help to open new vistas of Socio-economic developments for the area.

2nd broad objective of this conference is to stress the need of establishment of an interdisciplinary research centre the promotion of research on these regions. In the last two conferences scholars have consistently called for the establishment of such a research centre but the call so for has been cry in wilderness. It is hoped that this time our call receives positive response.

The Anjuman- Taraqqi-Khowar since 1956 has been reserving to promote the khowar language by seminars poetry reciting programs and publication of books and magazines. To Anjuman credit goes for the holding of the I.H.C.C for the third time and hopes to regularly continue to hold it in the future. This time FLI (Forum For Languages Initiatives,) Islamabad has collaborated in the arrangement of the conference. For which we thankful. At the end I thank you all and pleased to announce the inauguration of the conference. Thanks very much. 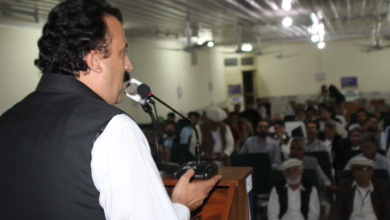 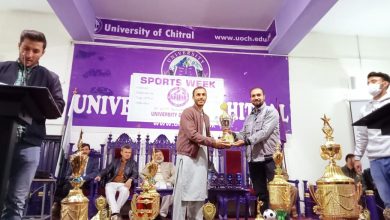 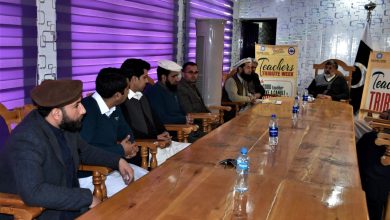